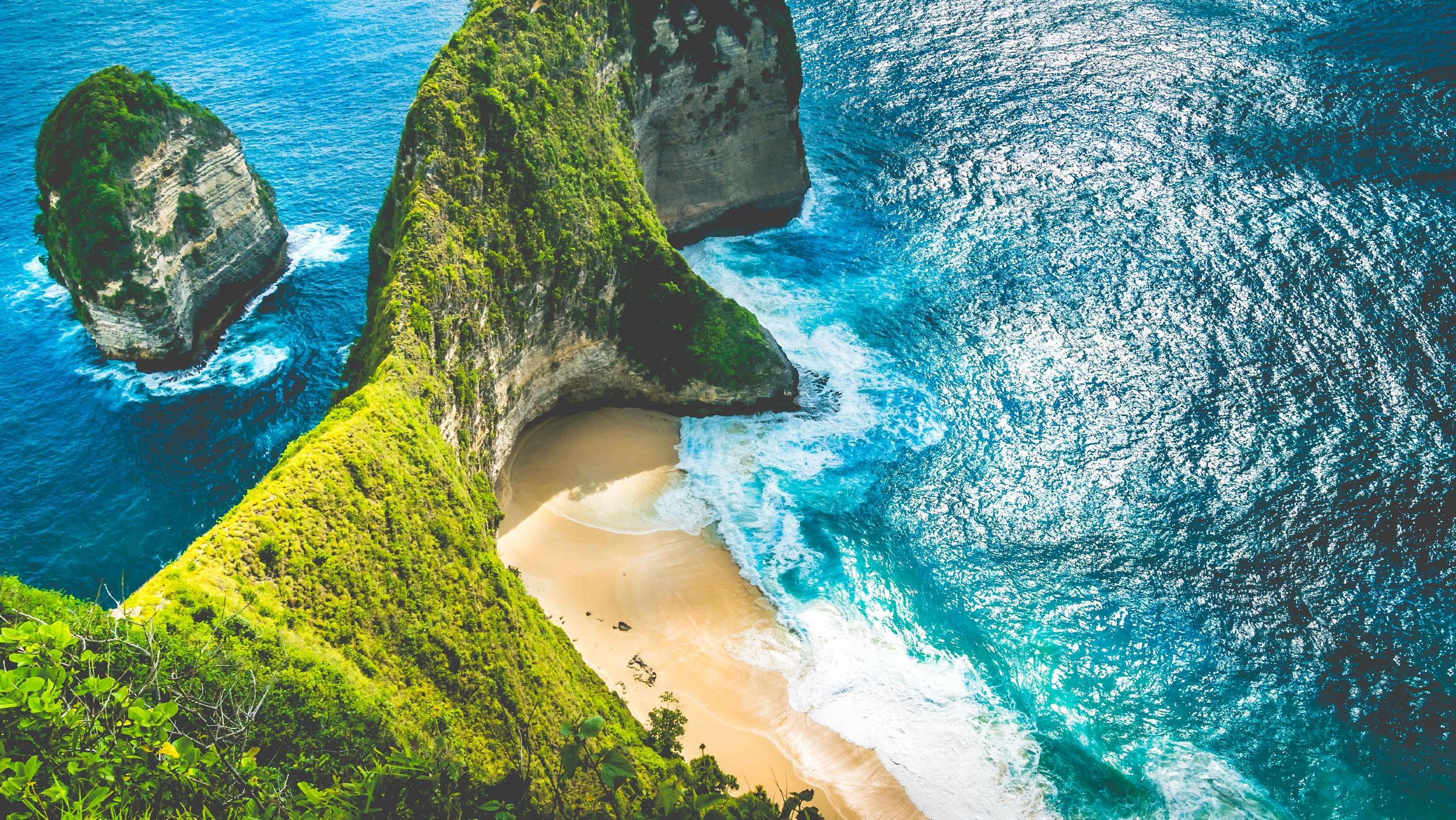 Indonesia has a population of approximately 210 million and is a multinational country. Indonesians, Indians, Chinese, Japanese, Sundas, Madurs, Malaysians - these are the people who populates this amazing country. They all speak many languages and dialects. Therefore it affected the architectural appearance of the country. Among the historical and mythical buildings in Indonesia you can see the Hindu and Buddhist temples with a stunning beauty of the cathedral and mosque.

Seasons in Indonesia do not differ from each other - temperature during all year 28-32°С. The coldest month is June with a +26-28˚С. Only in the mountainous areas at an altitude of 3000 meters above sea level the temperature drops to 0 ˚ C. Two seasons can be distinguished in Indonesia: rainy from November to February and dry from March to October. Humidity is quite high, averagely 75% to 95%, but surprisingly easy to bear.

It is believed that the very first inhabitants of the Indonesian archipelago came from India or Burma. In 1890, the fossils of the Pithecantropus (homo erectus), approximately 500,000 years old, were found in East Java. Later migrants ('Malays') came from southern China and Indochina, and began to inhabit the archipelago in about 3000 BC. Powerful groups, such as the Buddhist Empire of Srivijaya and the Hindu kingdom of Mataram, emerged in Java and Sumatra by the end of the 7th century. The last significant kingdom founded by the Hindus was Majapahit in the 13th century. The subsequent spread of Islam in the archipelago in the 14th century forced Majapahits to retreat in the 15th century to Bali.

Indonesia includes a full range of diverse societies and cultures. However, the education, media and nationalism policies pursued throughout the government have created a certain Indonesian national culture. Indonesia's distinctive cuisine and craftsmanship immediately brought it to the international arena.

Batik, the art of waxing on cloth and the subsequent creation of colorful and dramatic paintings, is produced everywhere in Indonesia, and the center of this activity is Jakarta on Java. Other forms of crafts are represented by ikat, a special weaving fabric made of painted threads; songket, a silk fabric with gold or silver threads; and Chris, an artwork often decorated with jewellery. Javanese wayang - puppet plays and gamelan - hypnotic music, composed mainly of percussion instruments - are also popular artistic forms.

Most Indonesian dishes were influenced by the Chinese, but some of the dishes in Padang, Sumatra, are truly native Indonesian. Wherever you travel in Indonesia, you'll find snacks sellers, such as potatoes, sweet nuts, biscuits or fruits. Rice is the basis of each dish, can be added in the soup or served as a side dish, also added to salads and marinades. A variety of tropical fruits would faint any greengrocer from Europe. These are apples with the taste of cream, durio, guava, jacques, mangoes, papaya, star-fruits and rambutans.

Social and religious responsibilities have for a long time formed a special code of conduct called adat or traditional law. Islam is the predominant religion of the archipelago and is slightly diluted with elements of Hindu Buddhism, adat and animism. There are hundreds of places in Java where spiritual energy is concentrated, which is believed to be absorbed by followers. Despite the long colonial period, missionaries' attempts to convert the Indonesian population into Christians have not led to anything.

Bali tours are among the most popular tours and directions. Bali has many names: it is called the island of thousands gods, thousand temples and thousands of dances. It also called an island of love or heaven on earth. Bali considered home to mythical baronga animals and according to myth, flexible dark girls with orchids in their hair take them for a walk in the morning. If in a hundred years you will be asked: "What is the happiest place on Earth?" You close your eyes and answer quietly: "Bali”.

Leisure in Bali will turn into a holiday - in the official calendar there are 230 festive days! So even if you want to, it is difficult to miss any of the festive processions. Holidays in Bali are also a gourmet paradise. The island will please you with its cuisine, which has taken all the best and unique ingredients from Chinese and Indian cuisines. Bali's hotels are probably the best in Indonesia, and they can be prescribed as a cure for everyone who is tired of the city bustle. Bali hotels impress with their exquisite design, and their highest level of service is elevated to the rank of high art.

Statistics say that tours to Bali more than a million buyers a year. Some want to enjoy the beauty of Indonesia, others want to see a different culture and way of life, thirds want to see the last border between the civilized and uncivilized world, and the fourth just to have a pleasant leisure. Indonesia generously meets all expectations and gives something more from itself - just for fun, as a reminder.

Indonesia is interesting for numerous cultural and historical sights, as well as diverse and extremely "densely populated" national parks.

Sumatra is the fifth largest island in the world with hundreds of kilometers of dark sandy beaches, dozens of the purest mountain lakes and ruins of ancient temple complexes. Well-known sights are: volcanic Lake Toba, royal tombs and palace on the island of Samosir, palace of Istana, Mesjid-Raya mosque and military museum "Bukit-Barisan" in Medan. In the northern part of Sumatra there is the largest reserve of the country "Gunung Leser", where rare Sumatran rhinos, tigers, wild bulls and orangutans live.

Around Gunung-Sinabung and Gunung-Sibayak volcanoes there are the best trekking areas on the island. It is also worth visiting the orangutan rehabilitation centre in Bohorok, the picturesque Palembang canals, the green mountain valleys of Kerinchi and Danao Ranao and the famous Krakatoa volcano in the Strait of Sond.

Kalimantan (Borneo) is the third largest island on the planet. It is not only the home of the Daiak tribe, the famous "bounty hunters", but also an amazing "reserve of time": both nature and way of life here are exactly the same as they were hundreds of years ago. While vacationing in Kalimantan, it is necessary to visit the village of Melak with the orchid garden, the "river town" Pontianak, go on the river routes in the area of Moire, Muntai and Long-Iram.

The main attraction of Komodo Island is the unusual view of the rams, which look like a mixture of crocodile and dragon. You can see them in the national park located on the island.

There are also whale hunting and "tricolor" Lake Kelly Matu on Flores Island, bullfighting on Madura Island, horse riding on Sumba Island, jumping over a two-meter high stone column on Nias, reserves with rams (the largest reptiles of the planet) on Komodo and Rinka Islands.

According to Indonesian Toraj the transition of souls to another world is a very crowded, noisy and fascinating event: a 12-day party with gluttony and libations, dancing, songs, jokes, laughter and fun. The reasons for this are the most valid: hell does not exist in toradjas, and all souls go straight to paradise after death - to run happy on the clouds, eat meals and in general to have all sorts of fun.

And if so, then there is no need to be afraid of this natural process - that's why in terms of fun Thoradjian funerals easily surpass expensive world carnivals. By the way, until the family of the deceased will not accumulate money for such a magical scale, the latter dwells quietly under the same roof with relatives - but in an embalmed form. And no stress, bad dreams and depressions are observed in anybody. Well, what other arguments are needed in favor of visiting this friendly, hospitable and direct country?

To make your trip to Indonesia even more festive and unforgettable, you need to include one of the local celebrations. The most important of all are:

March-April - memorial to the death of the Prophet Isa.

July is the birthday of the Prophet Mohammed.

While travelling to Indonesia it is difficult to single out the main sights of this country, as on its territory there are majestic temple complexes, breathtaking national parks, sparkling lakes and fantastic underwater world. To learn the main features of this country, tourists should stop at those sights of Indonesia, the description of which is known far beyond the country.

Temple Tanah Lot is the name of the landmark in Indonesia, which is the cultural symbol of the whole country. Location is on small plot of land in the open ocean, which can be accessible only at low tide.

Lake Toba is a natural attraction of Indonesia, which was formed as a result of the volcanic eruption 70 thousand years ago. The territory of the volcanic lake stretches for 100 km in length and 30 km in width.

Tanjung Putig National Park is located on Barneo Island. The best way to travel around its territory is by boat. During the tour you can see smoky leopards, pythons, crocodiles, orangutans and leopards.

Mount Bromo is a famous landmark of Indonesia, which is part of the Tenger massif, located in the eastern part of Java. Tourists, who manage to climb to the top of the mountain, can enjoy the mystical landscape of fabulous beauty.

The Primbanan temple complex is considered to be the largest Hindu construction in the whole country. It’s bizarre forms, unusual architectural constructions make this place incredibly popular among travelers.

Borobudur Temple Complex is the oldest not only on the island of Java, but also in the whole of Indonesia. It was erected in VIII-XIX centuries and to this day is shrouded in a halo of mysteries. It is still not known for what purpose it was built.

The Sultan Palace, located in Yogyakarta, is considered a separate kingdom in Indonesia. As many centuries ago, the Sultan with his family and his servants lived on its territory.

Uluwatu temple is one of the ancient temples on the island of Bali. Looking at it from the outside, it may seem as if the temple is hanging in the air. In fact, it is erected on a steep rock, 100 meters from its edge.